and at the door (Open Seating)

The Episcopal Church of the

Tickets sold through Eventbrite.com or
at the door (Open Seating)
For Information contact:
tcys@treasurecoastyouthsymphony.org

and the Academy Orchestra 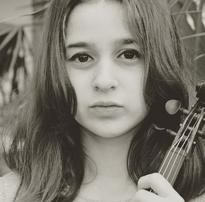 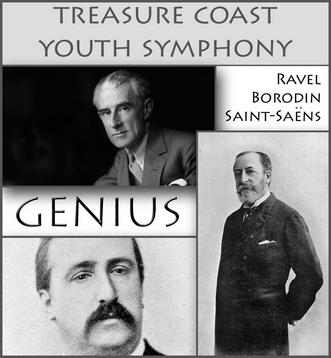 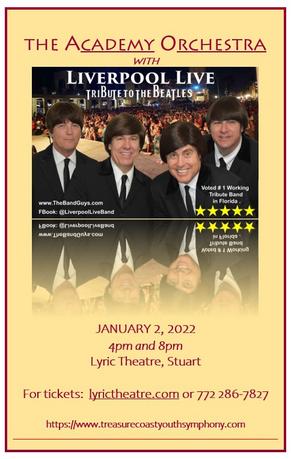 The Academy Orchestra incorporates pro musicians, as well as advanced students of the Treasure Coast Youth Symphony, giving the students professional performance experiences. Under the direction of Thomas Servinsky, the orchestra’s accomplishments range from the Grammy nominated recording with famed tenor Gabriel Silva, traditional classical concerts, Viennese New Year’s celebration concerts, and the symphonic rock collaborations. Thomas Servinsky has created all the orchestrations and arrangements for this performance, and to date, has completed over 100 Beatles, Led Zeppelin, and Queen orchestral scores designed for touring groups using the full orchestra/band platform with their productions.

Referred to as a “genius melodist”, Alexander Borodin was also “one of the most brilliant Russian scientists of his generation for whom composing was a hobby.” Maurice Ravel was considered the orchestral genius of La Belle Epoch and France’s greatest composer during his lifetime. Another French composer, Saint-Saens, was termed “a child prodigy of the Mozartean genius.” All three of these composers are featured in the Treasure Coast Youth Symphony’ spring concerts scheduled in April.  ​​

Liverpool Live and Academy Orchestra team up for a symphonic rock extravaganza, bringing the music of the Beatles to new heights. This concert chronicles the greatest hits of the Beatles through the years. Based out of Orlando, Liverpool Live has developed an incredible reputation of creating the true Beatles experience. Trained through Disney, they’ve become Florida’s premier Beatles cover band.